There wasn't too much running in my calendar this week... I'm putting it down to a 'recovery' but really it was more due to lack of time.

On the recovery front - all went reasonably well and there were no post-race issues with my ankle. So I don't intend on posting about 'anklegate' again and I'm moving on....

Before the race my left calf was a bit sore. Plenty of deepheat and massage beforehand made sure that I didn't feel anything during the run but now it's taking time to heel. I reckon it's a symptom of needing to rebuild muscle strength and a reminder not to push too hard too soon!

On Thursday I finally managed to fit in a lunchtime run - steady 7:10 pace 5.6 miles around Ballincollig. Earlier tonight having recovered from today's hangover I went for an easy 5.5 miles @ 7:45 pace. The said calf is now being iced so hopefully all will be well tomorrow. That's a 'massive' 11 miles for this week excluding my Guinness & Lennox's chips fueled walk home from town last night. Next week will have to be better...
Posted by bricey at 10:26 PM 2 comments:

Going into today's Cork to Cobh 15-mile race I wasn't sure how it would go. My last race was Cork to Cobh last year so today gave me a real chance to benchmark my current fitness.

I realise that I've only a few short weeks of 'low level' training (2 runs this week including today!) and so I was never going to emulate my 1:38 performance of last year. I settled on 7:30 pace with a 'see how it goes' race strategy. This would bring me home in approx 1:52:30. Richard was also planning a marathon pace run at approx 7:30 so it made sense to hook.

I arrived at the Race HQ a little after 8am for the 9am start (or so I thought) and after registering I went for a short (1.5mile) warmup. It was only while stretching at 8:45am, when everything was very calm at Race HQ, that I realised something was wrong - the race wasn't due to start until 9:30! At least I was early! So, what should I do with the extra 30 minutes??.... I went for another 2 mile warmup run with Grellan and Derek.

Richard and I started pretty far back and there was a lot of traffic over the first couple of miles. After a very slow start (7:45 first mile) we reached the 2 mile mark bang on schedule at 15:00. The pace continued to be in the low 7:20's and we passed through 5 miles in 37:10. Despite this being my fastest 5 miles in months I felt very comfortable. I guess it helped having someone to chat to to take my mind off the effort! At this point Richard pointed out that we were going a bit too quick for his marathon pace so he decided to ease up a little. I, on the other hand, wanted to test myself so I thought I'd kick on. I passed through the next mile in 7:05 (felt easy but probably a bit too quick) and I then settled into a 7:15 pace. It all felt good.

I crossed Mile 11 at 80 minutes just over 7:15 pace. At this point it felt good but it was shortly after that the wheels came off. I remember that I struggled over the same section last year albeit at 6:30 pace rather than 7:30+ pace. This year my lack of training really showed over the last 4 uphill miles. My pace dropped significantly. So much so that my average pace was down to 7:25 at the Half Marathon Mark (1:37). The uphill seemed never-ending and it was only the fear that my 'support team' may drive past at any moment that kept me from walking.

Shortly after the 14 mile mark Richard passed me looking good (he had warned me that he may put in a quick last mile) but I had nothing in the tank to react. So I took his last drop of water and left him strike for home. However, I did manage a bit of a sprint finish (during which my hamstrings nearly ceased up) over the last quarter just to show cause and I stopped my watch, wrecked but satisfied, at 1:52:40 (7:31 average).

With over 18 miles in the legs for the day no warmdown was on the cards... I'd had enough! 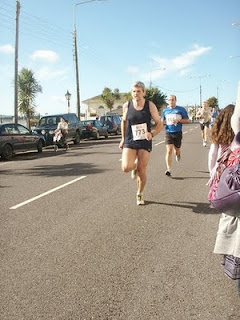 I'm over 14 minutes slower than last year and I need to do more training.

The good news is that my ankle gave me no trouble so hopefully this issue is now in the past.

I gave it everything I had today (so much so that I had to go to bed for an hour once I came home) and I'm glad to be back on the right road. Now it's time to build up some fitness and identify some goals...
Posted by bricey at 10:52 PM 5 comments: