They say you'll always remember your first marathon.  Although it is really just another race (just a bit longer) I've come to think that this is certainly a fair statement.  The difference being that a marathon is more than just a race.  It is to many a goal and to others a major lifetime achievement.  Of course, because of its history there is a mystic surrounding the distance and the preparation for the task of completing it, regardless of any time goal, is usually the focus of a number (many) of months training.  During this preparation time there is the constant fear that a late injury may end the any chance of making the startline let alone making the finishline.  Just like what happened to me!

I know that the majority of the (very limited) readership of this blog have already completed their first and many subsequent marathons but last Monday 4th June was my first opportunity to complete the distance.  Being a failed track runner, in my youth, I had always viewed the marathon as a something that a runner matured into and many years ago I decided that when I was 40 I would be mature enough.

So 2012 was to be the year and 12 months ago I selected that the Cork City Marathon would be the one!  Being a local race it would certainly remove much of the complexity of having to travel away and my "long suffering" support crew could also join in on the occasion!  Also I was very familiar with all of the roads having run much of the route many many many times!

On race day my wife and kids dropped me at Cork City Hall (race HQ) early which gave me some time to change and go for a brief one mile warm up around the city centre - a good opportunity to savour the pre-race atmosphere (tension!).  The sun was shining, despite the weather forecasts, and it looked like it would be a nice day for a run.

I had a pre-race plan but after struggling with a groin injury for the preceding 5-6 weeks I decided not to be too upset if the plan didn't work out.  However, it was a race and I had some objectives....
So my optimistic plan was to head out at 7:15 and see how things went.  Probably a novice marathoners mistake but one that I'd personally prefer than heading out too conservatively and always wondering what might have been.

So I lined up between the 3:00 and 3:15 pace groups and headed out at a pace that felt comfortably easy.  I kept missing the mile markers (note these could be improved next year) and the first one that I saw was at mile 4 where I discovered that I had just run an average 7:07 min/mile pace - a bit fast but it was still feeling easy!  The huge cheers from my support crew at the 3 mile mark certainly helped to maintain the pace.

Miles 5 brought me up to the first relay changeover point at Tivoli and the pace had eased back to 7:25.  In the past when I've run the relay in this marathon I've run the second leg so for the next 5 miles I was on very familiar roads.  Mile 6, 7 and 8 out to the Dunkettle roundabout and through the Jack Lynch Tunnel averaged 7:12 pace (back on target!).  Once again my support crew appeared on the side of the road to encourage me.... it worked! :)

It was shortly after passing the 14 mile marker that the first signs of the wheels coming off occurred - left hamstring cramp!  What the..... this had never happened before and was surprising as the pace so far had felt easy!  Despite a short walking break I managed to cover Miles 15 & 16 at an average 7:25 pace.

Cramps in both hamstrings appeared at Mile 17 (8:06 pace) .... and the first thoughts of going home early crept in... but I was still ahead of the 3:15 pacer group so maybe I could walk out the cramp and salvage something.  So I took on my second gel and walked out the South Link road!.

The remainder of the race was a series of running, stretching and walking.  The chart below tells the story. with mile splits ranging from 9:01 to 9:18 for miles 18, 19, 20, 12, 22, 23, 24 & 25.  Unfortunately the encouragement from the spectators (each mile I passed someone that I knew!!) couldn't help.  Aerobically I was as fresh as when I started the race but my legs just didn't listen!!
Downhills were the worst as the hamstrings and calf muscles went into spasm and I was in danger of falling over each time I was forced to stop!  Thomas and his 3:15 bus passed by at the 18mile mark and I decided not to hop on.  My focus now was to get to the finish and hopefully get there ahead of Grellan's  3:30 bus!!

Not even the bottle of Coke that my support crew had a mile 21 for me was enough to fully get me going!  The oranges and sweets kindly offered by Kevin Geary and the team from Eagle AC after the final relay change over point were welcome and helped a little but the sharp decent at Inchigaggin Bridge brought back yet more cramps!  However, just like smelling salts, the sight of a fellow runner lying on the pavement on the Straight Road receiving medical attention shortly after Mile 23 was a stark reminder that things could be a lot worse!

The smell of the finishline somehow kept the worst of the hamstring cramps at bay and brought me to the 26 mile mark at 7:48 pace.  And the added motivation from Fergus Wall, the 1:30 half marathon pacer, who shouted "run bricey run just like it says on the website" and the thought that my support crew (wife and kids) would be at the finishline was enough to bring me though the last quarter at 6:40 pace to finish just ahead of Grellan and his crew!

Here's the summary:
Overall I'm content with how things went today.  I gave it a shot and I've learnt a few lessons.  My first marathon is now over, I know I'm mature enough to do it again so it's now time to plan my next attack on the hallowed distance.  Next time, with some proper training and a bit of luck I'll have a real target and it won't be just to finish and, if possible, run sub-3:30!


Some pictures that tell a story (thanks to the many photographers out on the course incl. Doug Minihane, Darren Spring, John Quigley, Gearoid O'Laoi & Joe Murphy)...
Mile 2... 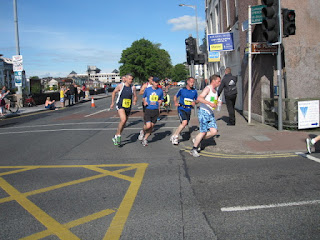 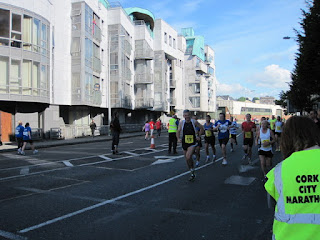 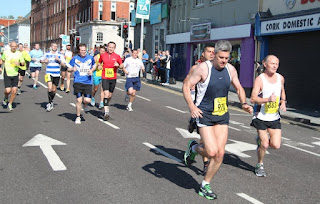 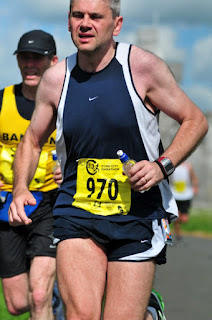 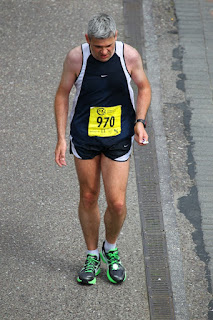 I'm now resolved to (at least) make the start line and hopefully the injury issues which have plagued my last month's training will not prevent me from making the finish line too.

As the title of this post suggests the later stages of Monday's run will be real journey into the unknown. I have faith that my body will pull me through but I realise that my fate was sealed a number of weeks ago. I would have liked to have had some more long (20+ mile runs) under my belt by this stage but the single 22 mile run 5 weeks ago will be all I can rely on come approx 11:15 on Monday morning!


It has been pointed out to me (more than once) not to think of a target time for my fuirst marathon.  Unfortunbately this is easier said than done.  I don't have a 'target time' and my No. 1 target is to make it home without a DNF.  I do have a 'nice to have time' in mind so I won't be setting out at 8:30 pace and just hoping to get around before the course closes - it is a race after all!