A picture of pain... 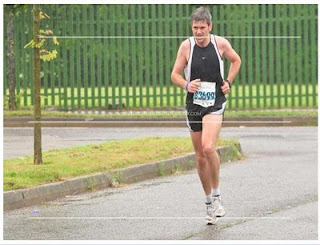 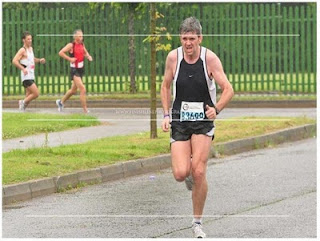 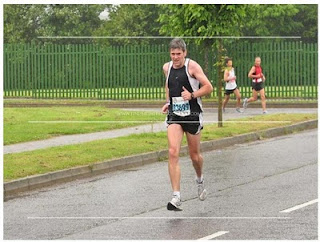 Due to other commitments I'm currently having an unplanned 'recovery' but hopefully this weekend will mark my first steps into a serious return to training. Afterall Cork to Cobh is less than 4 months away!!

When the opportunity to run a leg of today's marathon as part of a team made up of old college clubmates I was delighted. It was an opportunity to benchmark my condition!

Today was wet and windy but not too cold - nice running conditions (when not running into the wind!) but what was best for me was just to be there! To be honest there have been times over the past 6 months when I doubted that I'd be able to run but mostly I doubted if I'd be able to run so soon!

The team was made up of:


Tactics were decided late last night outside of a pub (long story!). Ian would run the first leg as he was planning on running the full marathon, I would do the second as my sister-in-law was also doing that leg and that made life simpler for the support crew. Sean and Brid decided among themselves their leg and Ray was nominated to take the last and 'glory' leg! For one reason or another none of us were in great shape so the consensus opinion was to enjoy the event and not race for a time.....

I went to City Hall at 8am to collect my number from Sean but I met everyone else, including Richard, Thomas and others, except Sean. I also thought that I'd see Grellan but he must have been setting his metronome!

Sean arrived just after 8:30 which meant that I missed the shuttle to the start of my relay leg so I had to run. I suppose it wasn't a bad way to put in a 2.5mile warmup, unfortunately it was raining so I got soaked!

Ian's plan was to run the marathon at 6:50min/mile pace so I thought I'd tag on to him. When I suggested this plan at the hand over he beckoned/pushed me on. I guessed that either he wasn't feeling too good or he thought that I was in better shape than I actually am! Then the race day adrenalin went to my head and I headed off at something like 6:30 pace. Although I was feeling great it was not a good idea, I don't have the fitness. This realisation dawned when I hit the first uphill section before entering the Lee tunnel and after the tunnel it was uphill all the way. Ian, tagged on the end of the 3hour pace group, caught up and passed me as we climbed out from the tunnel.

Fatigue, headwind, and hills all took their toll!

I passed my support crew (Pam, Eva, Una, Joe, Eva & Don) at approx 3 mile mark. That raised my spirits but unfortunately not my pace.

Slogging on as best I could I managed to pick up the pace over the last half mile. As I approached the changeover zone I spotted Sean chatting! I yelled out and he jumped into action! Apparently he wasn't expecting me so soon.

I completed my 5.5+mile leg in 38:00. Last time I ran this leg in 2008 I completed it in 34:51. But given the weather my fitness and the past 6 months I was more than happy with my time! As a warmdown I ran the 2.5mile back along the course to my fan club (and dry clothes!). So in total I must have run 10 or 11miles today (if only I had my Garmin!) ... the most I've done since Christmas! And although my ankle was a bit sore during and afterwards it held up reasonably well and, as I type this, it's beginning to feel better and better!

Overall our team came home in 3:03 - about half an hour quicker than we predicted last night! Obviously the race adrenaline got to all of us!

Personally, I think that it's a good start to the summer and hopefully by September I'll be much fitter and planning some more races!

Ray bringing our team home (his comment afterwards, looking at me, "it would have been nice to break the 3 hours where did we loose the 3 minutes?" or something similar!!).... 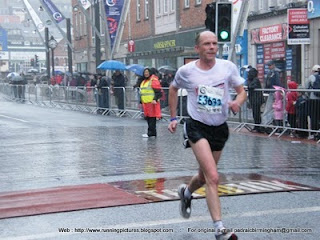 Well done to those who ran the full thing it wasn't comfortable out there and I'm sure that we'll get to hear all about your adventures in your various blogs....

So I'm down to run the second leg (5.5+ miles) of the Cork Marathon tomorrow. Last time I ran this leg (2008) it took me just under 35mins but I suspect that tomorrow will be much slower!! The fact that I haven't run in a week won't help! As a team we're running for 'enjoyment' and not a 'place' this year (or so I'm told) so the pressure is off a bit. phew!! :)

Good luck to all doing the full thing and Grellan.... I hope that you have your metronome set as there are alot of people counting on you!! No pressure then!! :)
Posted by bricey at 10:35 PM No comments: