I took my first small steps back into the racing world last weekend.  It was only a 4km run leg as part of a super sprint triathlon but it was a start.


We got to Dublin late on Saturday night but there was still just a little time for a quick team 'briefing' in the pub.  We took our hydration strategy really seriously and made sure to sample the local brew.  This didn't make the early start on Sunday morning any easier..


After registering at 7am, checking out the swim course and transition area, watching the early waves starting and meeting up with colleagues who were also taking part it was almost my turn to compete (3+ hours later!!). So, while the swimmers and cyclists did their thing Grellan and I went for a couple of miles warm up.  This was just as well as it gave me a opportunity to see the course in advance.


When we got back to transition our swimmers had finished their 600m swim and the cyclists were well on the road.  It didn't take long for my teammate to finish his 16k cycle and then it was my turn...


The run course was a mixture of road/pavement and cross country roughly in equal measure.  There were some drags (which if tackled at speed will turn your legs jelly) and even the relatively flat cross country section was a bit uneven so it's certainly not a course for a pb.  Which was just as well because I'm nowhere near pb shape at the moment.  So the plan was to go out steady and hang on.  The only problem with that plan was that this was a race and there was interoffice pride at stake!  So I headed out feeling comfortable at 5:30 pace.  After 800m the course went uphill and certainly made sure that my overall mile split would be considerable slower (6:23).  By the time I reached the top of the hill and headed out onto the country my legs were like lead and my breathing was so loud that anyone ahead got plenty warning that I was coming.  But I was passing runners all the way so that was motivation to keep going for the team (and it was only a 4k run so it would be over soon...)

Only one person passed me (a chick but a very fast one!! an Irish international 1500m runner - Orla Drumm) and that was with about 800m to go.  This gave me some motivation to kick for home at sub 6min pace.  I finally crossed the line and stopped my watch with 16:44 on the clock.  It took me 12secs to leave transition so I estimate 16:32 for the leg.  A slow time but respectable enough given the course and probably as fast as I could have hoped for given that I haven't done any real speed work in a very long time.

The full results have yet to be published but one of our 4 teams (not the one I was in!) won the team relay. Congrats to them.

Now it's onwards and upwards to the next race (probably Cork to Cobh 15m at the start of October).  That gives me 5 weeks of serious training time..... 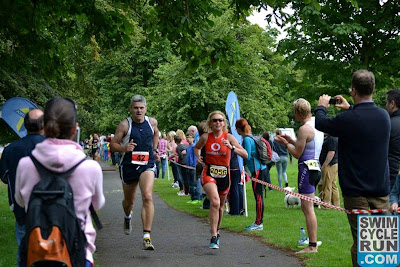 Some of our team members looking relaxed beforehand.... 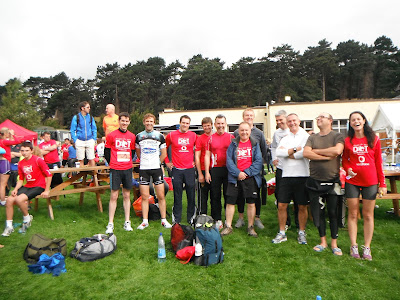 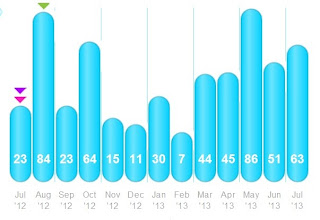 At the moment I'm just focusing on base and routine and trying to stay injury free.  I'm becoming increasingly jealous of all those other bloggers and dailymilers who've been completing their target events, running longer and running faster than ever before!!  I sense that it's almost time for me to decide on some targets of my own and put a plan together.....

Dailymile sent me an email yesterday that summed up my running in 2012, literally! 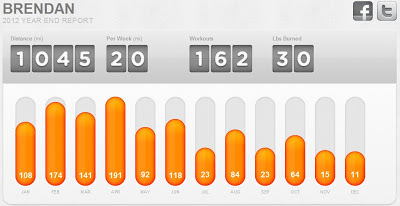 It was definitely a year of two halves. It started with some promise and progress (the first real progress since breaking my ankle in January 2010) and a 40 day streak into my 40th birthday. Things were looking on schedule for a respectable marathon debut but then the wheels (legs actually) came off. The marathon in June turned out to be a learning experience and I still hoped for a late summer or autumn rematch with the historic distance but since then things have gone steadily downhill.

July saw a back (disc) injury and since September I've been struggling with a "right calf issue" that now prevents me from running more than 2 miles every 2 weeks (or so).  I stubbornly decided not to seek professional advice in the hope that things would come right in the end.  It didn't!

So last week I finally coughed up some money and went to a physio.  Apparently my calf issue is a hangover from my broken ankle (something that I thought was long in the past!).  A biomechanical imbalance.  In truth and I've had an ongoing series of lower body issues since my initial recovery from my broken my ankle in late 2010/2011.  So this was probably something waiting to happen.  It's time for some massage, dry needling, joint manipulation, calf strengthening exercises and flexibility work.  I last tried to run on the 28th December and it'll probably be a couple more weeks before I'm able to start back.  Hopefully this time things will work out!

In the meantime I'm going to try some aerobic exercise and eat less in an attempt to shift the many pounds added to my person since last June!  Hopefully Spring 2013 will be the time of new beginnings.  I dare to hope that I'll be back to complete some unfinished business in Cork this year but......